As a Hydraulic Disc Brake Caliper Supplier, share with you. Disc brakes are hydraulic and controlled by hydraulics. The main components are brake discs, sub-pumps, brake calipers, oil pipes, etc. The disc brake has fast heat dissipation, lightweight, simple structure and convenient adjustment. Especially at high load, it has good high-temperature resistance, stable braking effect, and not afraid of muddy water. When driving in winter and bad road conditions, the disc brakes used by many cars include flat brake discs, punched brake discs and paddles. The linear brake disc, among which the braking effect and ventilation and heat dissipation ability of the line brake disc is relatively good. 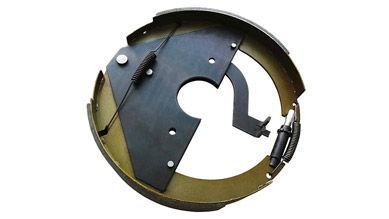 The Trailer Disc Brake structure is more complicated than the drum brake, and requires higher calipers and piping systems, and the cost is higher than the drum brake. If the wear between the friction plate and the disc of the brake pad increases, after the deformation of the seal ring reaches the limit during braking, the piston can continue to move until the friction plate presses the brake disc. After the brake is released, the rectangular rubber seal pushes the piston back the same distance as before wear, and still maintains the standard value.

For cars traveling at high speed, due to the frequent use of brakes, the friction of the brakes will generate a large amount of heat, which will cause the brake temperature to rise sharply. If this heat cannot be dissipated well, it will greatly affect the braking performance. The phenomenon of thermal degradation of thermal performance is not a joke, the brake is directly related to life. From this point alone, disc brakes are currently used on the front and rear wheels of bridge cranes.

At present, most of the cars we drive today are not entirely disc brakes, but front disc rear drum hybrid brakes (that is, disc brakes are used on the front wheels and drum brakes are used on the rear wheels), which is mainly due to cost The above considerations are also because the car's axle load moves forward during emergency braking, and the requirements for front-wheel braking are relatively large. Generally, a disc brake is sufficient for the front wheel.

Compared with drum brakes, the working surface of the disc brake is flat and heat is transferred on both sides. The disc rotates easily to cool, it is not easy to undergo large deformation, and the braking performance is stable. The role is enhanced; while the drum brake transmits heat on one side, the temperature difference between the inner and outer sides is large, causing the brake drum to deform easily. At the same time, after a long period of braking, the brake drum expands due to high temperature and the braking efficiency is weakened.

In addition, the disc brake has a simple structure, convenient maintenance, and easy automatic adjustment of the brake clearance. The disadvantage of the disc brake is that the friction plate directly acts on the disc, there is no automatic friction boosting effect, and the braking efficiency is low. Therefore, if it is used in a hydraulic braking system, the pressure of the brake actuation pipeline is high It is necessary to install a power assist device separately; when it is also used for the parking brake, the parking brake transmission is more complicated than Trailer Drum Brakes.

Previous Do you know why the Trailer Brake Caliper failed to brake again?

Next Notes when Trailer Hydraulic Brake is running